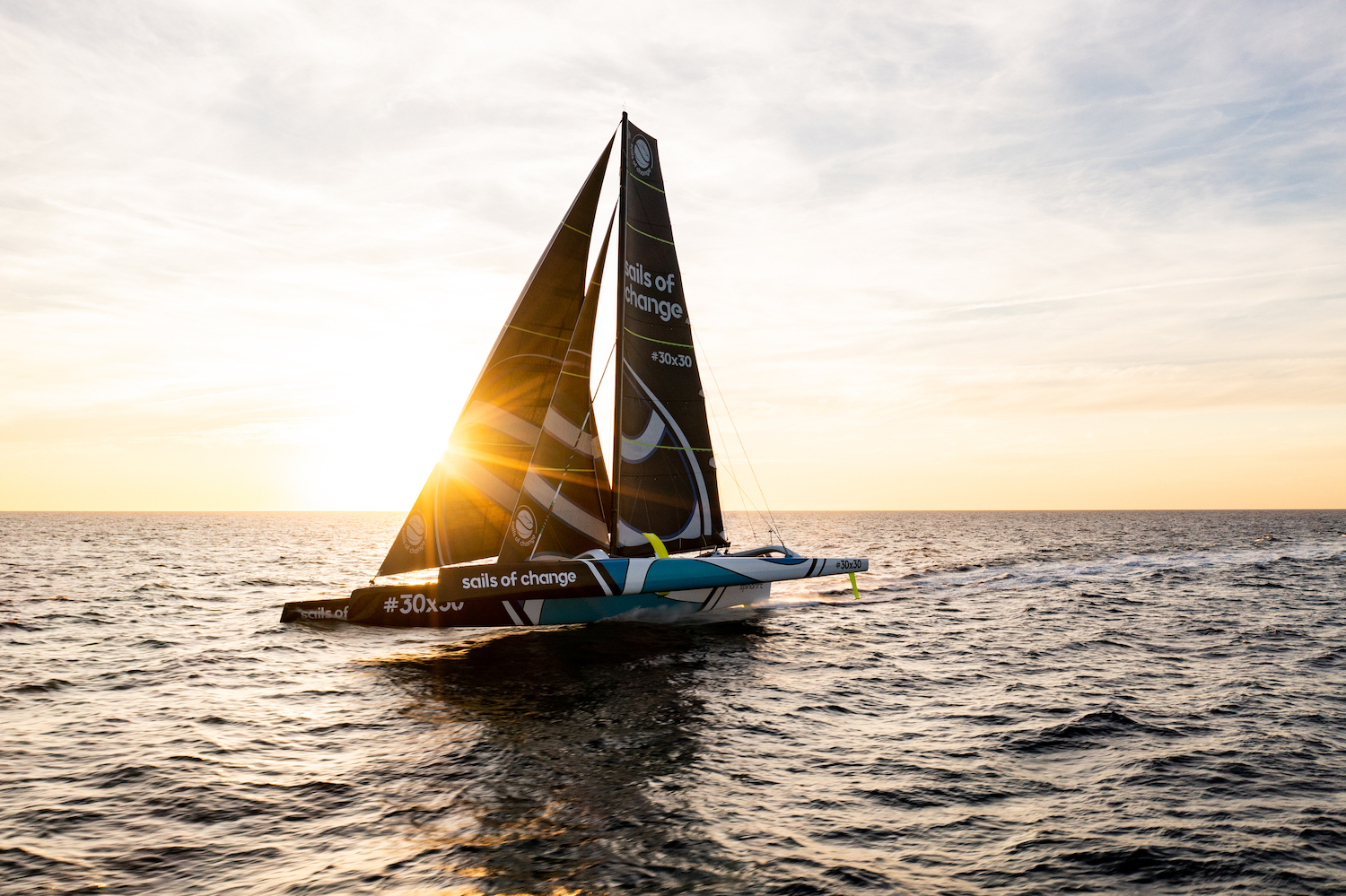 AROUND THE WORLD: A NEW ATTEMPT BY THE MAXI TRIMARAN SAILS OF CHANGE

Yann Guichard, Dona Bertarelli and nine other sailors will make up the crew of ‘Sails of Change’ for their next attempt on the Jules Verne Trophy, an award for the fastest non-stop and unassisted circumnavigation of the world. Several years of hard work will culminate in this ultimate sporting challenge. The crew also aims to raise awareness of the need to preserve ocean and land ecosystems. From October 24th, the team will be on standby, ready to set sail on a new adventure.

From Monday, October 24th, the crew of Sails of Change will be on standby, studying the weather conditions and gearing themselves for an immense challenge. The objective is to win the Jules Verne Trophy by beating the round-the-world record held  since 2017: 40 days, 23 hours, and 30 minutes. “It’s the ultimate sporting goal, an extraordinary time to beat, that has been halved in the space of 30 years“, said skipper Yann Guichard.

A TEAM ON THE RISE

The Spindrift team has been hard at work throughout 2022. The team participated in all six events of the TF35 Trophy, an annual championship which combines sea and lake races across Europe. Spindrift ended the season in 3rd place overall.

The maxi trimaran has also sailed on multiple occasions. “There are still a few adjustments to be made, but the boat is ready,” said Yann Guichard. “I can feel the team is eager to go.”

Once standby begins, the maxi trimaran, based at La Trinité-sur-Mer, will be ready to set off for Brest at the first favourable weather window.

A TEAM OF LIKE-MINDED ENTHUSIASTS

Joining Yann Guichard and Dona Bertarelli, the onboard reporter, will be nine crew members. “Some have been part of the project for years and others have joined us this year,” said the skipper. “We have an experienced team who enjoy competing and who are ocean enthusiasts. We share the same appreciation of effort and solidarity”.

THE CREW PRESENTED BY YANN GUICHARD:

Dona Bertarelli (54 years old): “I’m delighted to share this new adventure with Dona, who participated in our first round-the-world trip in 2015-2016. Her presence will bring added purpose to a great sporting challenge.”

Thierry Chabagny (50): “An experienced sailor who has already sailed twice around the world. His experience will be invaluable.“

Grégory Gendron (39): “Joined our team in 2019. Greg is always smiling, friendly, and ready to help. He is very comfortable sailing at sea, I have total confidence in him.”

Clément Giraud (41): “He just finished the Vendée Globe and is one of our Southerners. He is full of the joys of life.”

Jacques Guichard (42): “Watch-leader, I’ve been able to count on his multiple talents since the birth of the Spindrift project. Sharing this adventure with my brother is such a blessing and will bring us even closer together. “

Pierre Leboucher (41): “A newcomer to the crew but with solid experience, having sailed in the Olympics and Le Figaro. Pierre is a true sailor who likes to push himself to the limits.”

Christopher Pratt (41): “He also joined us this year. He is a Cartesian spirit: structured and focused on performance. If he does something, he does it 100%.”

Xavier Revil (51): “A great sailor and former holder of the Jules Verne Trophy. I’ve known Xavier since my Optimist years; he’s been with us since the start of the Spindrift adventure. As a watch captain, I know I can rely on his know-how at all times.”

Benjamin Schwartz (36): “He has sailed in Le Figaro and has sailed round the world in the Volvo Ocean Race. Responsible for the navigation unit, I can count on his detailed analysis of weather strategy.”

Julien Villion (30 years old): “With solid experience from Le Figaro, he is always seeking the right settings and constantly questioning himself, raising our overall performance. “

Jean-Yves Bernot (router): “A recognised specialist, he has been by our side since our first round-the-world attempt in 2015. As both a former navigator and a land router, he knows the course like no one else. He’ll be our guardian angel during this new attempt.”

SAILS OF CHANGE, AN EXTRAODINARY TRIMARAN

A multihull built to perform. 37 metres long, 23 metres wide and weighing 21 tons, Sails of Change is the largest ocean racing trimaran ever built, and has a track record to match. Launched in 2008, the boat held the Jules Verne Trophy from 2012 to 2017 (45 days, 13 hours). Sails of Change was acquired by the Spindrift team in 2013, winning the Route de la Découverte (between Cadiz and San Salvador), and performing well in the Rolex Fastnet Race (twice), and in the 2016 Transat Québec – Saint-Malo.

“Sails of Change is more than a human and sporting adventure,” said Yann Guichard. “We wanted our philanthropic activity and our deep, personal goals of protecting the planet to inform the Spindrift programme. Dona was already raising awareness of this theme during our first attempt in 2015.”

“For 20 years, I’ve been working to create large marine protected areas, and to safeguard biodiversity,” added Dona Bertarelli. “The connection between ocean preservation, the climate, and human health is no longer in doubt.”

“Since 2021, Spindrift teams have been preparing a round-the-world attempt without using fossil fuels, a ‘challenge within the challenge’ according to Yann. There will be no combustion engine  onboard, which traditionally powers a boats’ electronics, communications, desalination, and water heating. “To compensate, we have solar panels, two wind turbines and a methanol fuel cell,” said Yann.

The Spindrift team’s commitment to protecting the environment does not stop with the boat. The crew, as well as the boat, promote the ’30×30′ message, relaying the call from scientists to protect at least 30% of ocean and land by 2030, in order to prevent biodiversity loss and to build resilience to climate change. “The degradation of our oceans, land and freshwater systems is destroying the planet’s ability to support life,” said Dona Bertarelli. “The fight to protect nature, which we’ve been engaged in for a long time, gives extra impetus to the team and to our round-the-world challenge.”

Dona and Yann are Patrons of the International Union for Conservation of Nature (IUCN), the largest and most diverse environmental network in the world, and a global authority on the state of the natural world and the measures needed to save it.

A new partnership between IUCN and Sails of Change called “Sports for Nature” was launched at the Sport Positive Summit at Wembley on 5 October, to help sports organisations mitigate the negative impacts on the climate, and to take concrete steps to protect biodiversity. “As a sportsperson, the link between sports and nature is very clear. Athletes need clean water and fresh air to perform. As such, they have a natural interest in protecting the environment,” said Yann Guichard.

SPINDRIFT FOR SCHOOLS: INSPIRING AND EDUCATING THE YOUNGER GENERATION

The ‘Spindrift for Schools’ fund was created in 2014 to raise awareness of environmental issues among young people.  Through this fund, educational resources, approved by the French Ministry of Education and supported by UNESCO, are made available to teachers. Additional subjects will be offered to schools as part of the curriculum throughout the world tour in order to bring onboard the youngest in this global ocean adventure.

For students as well as for sportsmen and women or even the curious, this will help them to grasp the intensity of this round the world trip from a perspective that shares the ‘Sails of Change’ values. Dona Bertarelli insists on “learning from nature in order to act”, “uniting to inspire change” and “keeping a sense of wonder because it is easier to protect what you know, what you understand and what you love“.

For Yann Guichard, he makes the link with life onboard and evokes “the need to surpass oneself, to show resilience and support each other at all times“. There are so many arguments and motivations before setting off on one of the most exciting challenges in ocean racing.

ABOUT SAILS OF CHANGE:

Sails of Change is a foundation dedicated to the regeneration of biodiversity through sport and art. Founded in 2020 by Dona Bertarelli, her husband Yann Guichard and her children, Sails of Change is grounded on the family’s belief that sport and art have great power to raise environmental awareness and promote change. Dona Bertarelli is a sportswoman, investor and philanthropist who has dedicated nearly two decades to protecting ecosystems by creating large-scale marine protected areas. Yann Guichard is the skipper of the Spindrift professional multihull sailing team. An Olympic sailor, he has won races and set records throughout his sailing career. Sails of Change is based on three pillars (INSPIRE. UNITE. CHANGE) and its activities work towards a common goal: protecting 30% of the ocean and land by 2030.