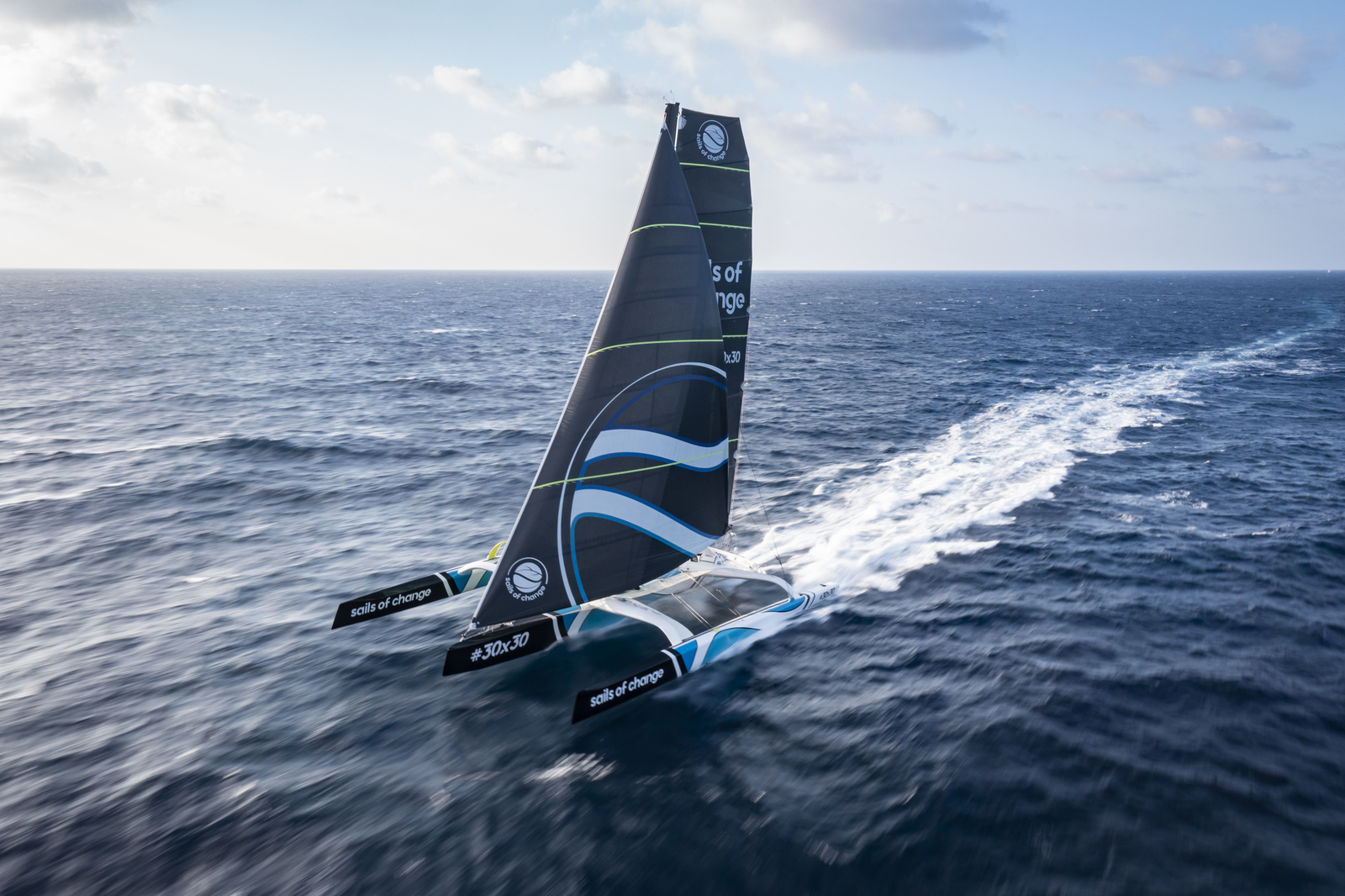 Dona Bertarelli and Yann Guichard announce the end of standby and plan a fresh attempt.

On November 1st, 2021, Dona Bertarelli, Yann Guichard and their team began the standby for a fourth attempt at the Jules Verne Trophy around-the-world sailing record. Since this date, there has not been a suitable weather window for the crew of the maxi-trimaran Sails of Change to set sail with a realistic chance of beating the record. Today, Dona Bertarelli and Yann Guichard announce the end of standby for Spindrift and their plans to renew the attempt later this year.

To beat the around-the-world record under sail, it is key to maximise the team’s chances during the first section of the route. The primary challenge for the maxi-trimaran Sails of Change is to make a very fast passage from the island of Ushant to the equator (within the record time of 4 days 19 hours and 57 minutes set by Spindrift herself in 2019). The crew would then need to make the southern tip of Africa in under 12 days, to be level with the previous record. With this in mind, since November 1st, 2021, Yann Guichard (skipper), Benjamin Schwartz (navigator) and Jean-Yves Bernot (onshore router) have been analysing the weather in a bid to pinpoint the perfect configuration for linking these two sequences together. However, over the winter, the weather scenario has not once been favourable for starting the attempt.

Jean-Yves Bernot explains: “For some weeks, the low-pressure systems rolling towards Europe have been positioned a long way south, around the Canaries, Madeira and to the south of the Azores. Such a weather configuration prevents the trade wind from being strong and becoming established longer term. Usually, such episodes are fleeting, only lasting a few days at best. However, this year, the cycle has been on constant repeat. This has resulted in large areas of light breeze from the south of Gibraltar as far as Cape Verde. Of course, this is not at all conducive for setting sail on a round the world record. At the same time, in the South Atlantic, the Saint Helena High was extensive at the start of standby, making it difficult to negotiate due to the numerous windless areas. For Sails of Change, there was a very real risk of getting stuck there”.

In light of this situation, at the beginning of January, the team decided to extend the period of standby by two weeks until January 31st. During this time, the weather situation has remained unchanged and the forecasts for early February are not optimistic.

Jean-Yves Bernot also points out that a late entry into the Deep South is not recommended: “The austral summer is gradually drawing to a close. Sailing conditions in this area are becoming increasingly complicated with the cold, the gales and very heavy seas. With too much bad weather comes the increased risk of suffering damage, and it is more difficult to maintain the high average speeds needed to break the record”.

Within this context, Dona Bertarelli and Yann Guichard have decided to call off their team’s standby for the Jules Verne Trophy record.

Yann Guichard, skipper of the Spindrift racing stable, considers today’s situation: “For the past two years, the team has done a remarkable job optimising our maxi-trimaran Sails of Change. The boat has never been so well prepared to break this record and that’s something we can be proud of. Of course, it’s disappointing not to be setting sail. We switched to code green twice, but unfortunately the weather windows promptly closed up again. The routing subsequently confirmed that we’d made the right decision not to leave, so we have no regrets. I greatly appreciate that the entire team has been mobilised and at the ready for the last three months, especially the sailors, who remained their high levels of motivation. We’re lucky to have a fantastic team and a boat which is designed for the Jules Verne Trophy. This is why Dona and I are delighted to announce that Spindrift racing stable will be back on standby for another attempt at the around-the-world record at the end of this year”.

Dona Bertarelli adds: “We are about to unveil the sports programme for our team for the year ahead. Through our various projects, we’re keen to continue being the standard-bearer for the “30×30” campaign, which aims to protect 30% of our planet by 2030. Our aim is to raise awareness among the general public and institutions to promote the additional commitments which governments around the world need to make. At the same time, we’re extending our efforts with students through our “Spindrift for Schools” programme, which aims to raise awareness among young people”.