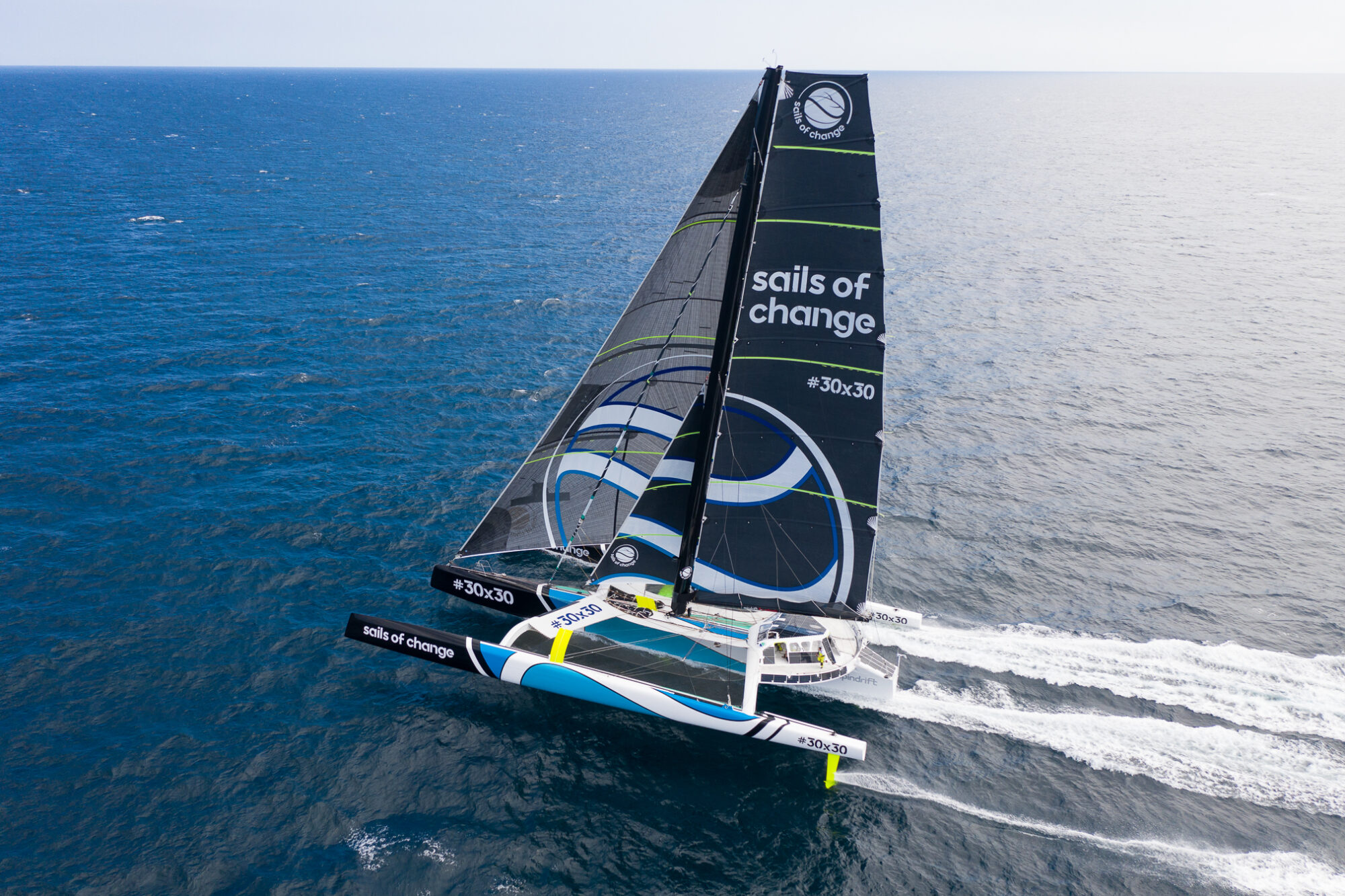 The maxi-trimaran Sails of Change in full working order.

Following a summer refit and relaunch a fortnight ago, the crew of the maxi-trimaran Sails of Change has been out sailing on multiple occasions. Last week, Dona Bertarelli, Yann Guichard and their crew headed offshore for 72 hours to thoroughly test the systems, boost their confidence and raise their game still further with just a few weeks to go until their next standby for the Jules Verne Trophy attempt.

The maxi-trimaran Sails of Change has returned to the liquid element, to the sea and the waves. After a two-month summer refit completed right on schedule, the relaunch itself was a victory for the Spindrift teams. “They did an excellent job”, exclaimed Yann Guichard. In addition to checking all the on-board systems (mechanical, hydraulic and structural), the hull has been completed revamped. “It’s a substantial refit with some time limits which couldn’t be reduced down, particularly in terms of the drying times. However, the weather was on our side so we could get the boat back in the water as and when planned.”

From the moment they got the boat back out on the open ocean, the whole crew was able to witness the effectiveness of the refit work first-hand. “Within the space of two days, we validated and checked all the elements associated with the refit,” said Yann Guichard. He adds : “Everything has been done with extreme precision and a great deal of efficiency. Immediately after a refit, it’s rare to go out on the water and have everything working like a dream, with nothing but a derisory jobs list on our return!”

The effort put in by our onshore teams at the height of the summer has meant that the sailing team has been able to focus all their energy on the navigation, the on-board trimming and the crew cohesion on the water. To do this, nothing beats a trip on the open ocean over several days and that’s just what the crew managed to do midway through last week. On the programme was 72 hours offshore, “hunting down some breeze and rough seas,” explained Yann Guichard. In this way, Sails of Change left the shores of Brittany in her wake, headed up towards Ireland in upwind and then downwind conditions, before returning to the base. “We enjoyed varied conditions, a series of fronts rolling through and a maximum of 25 knots of breeze,” adds the skipper.

Already a great synergy aboard

From a technical standpoint, the passage enabled further checks of the on-board gear, tweaks to the trimming initiated under autopilot, as well as testing of the system put in place to produce energy. “We don’t use fossil fuel so it’s a question of ensuring that sufficient energy can be produced using the solar panels, our wind generator and our bicycle-powered electricity generator (for electrical systems of navigation, communication, the desalinator, to heat water to rehydrate freeze-dried food, etc).”

On deck, this long sea passage was an opportunity to link together manoeuvres, rediscover a typical working rhythm and also strengthen bonds. Indeed, the crew has changed over time: “Even though everyone has to go through a period of adjustment in situations like this, it was a really smooth transition”, assures Yann. “The key thing in sailing is not related to technical skills, it’s about human alchemy, especially when there are 11 sailors aboard the boat. However, the atmosphere is very positive.” Benjamin Schwartz, on-board navigator, agrees: “everyone quickly got their bearings and everything is more fluid between us. Though it was just a training session, we could sense that everyone involved was keen to do their best and raise their game in every possible area.”

“You can clearly see that everyone’s very eager to be up to speed and that there’s a sense of respect at having the opportunity to sail aboard this legendary boat,” explains Dona Bertarelli, founder of Spindrift. The last time she had the chance to sail aboard the boat for such a long time was during the Quebec-St Malo, in 2016, so she was able to see just how much things have progressed aboard on a technical level. “The optimisations mean that the maxi-trimaran is even more powerful and even more enjoyable to drive.” Dona made the most of the period offshore to test transmission and communication systems to bring this adventure to as many people as possible. Because all the team have one main focus now and it is just around the corner: to get themselves on standby to set sail on the Jules Verne Trophy this autumn and get the largest trimaran ever built to take on the crewed round the world record challenge.