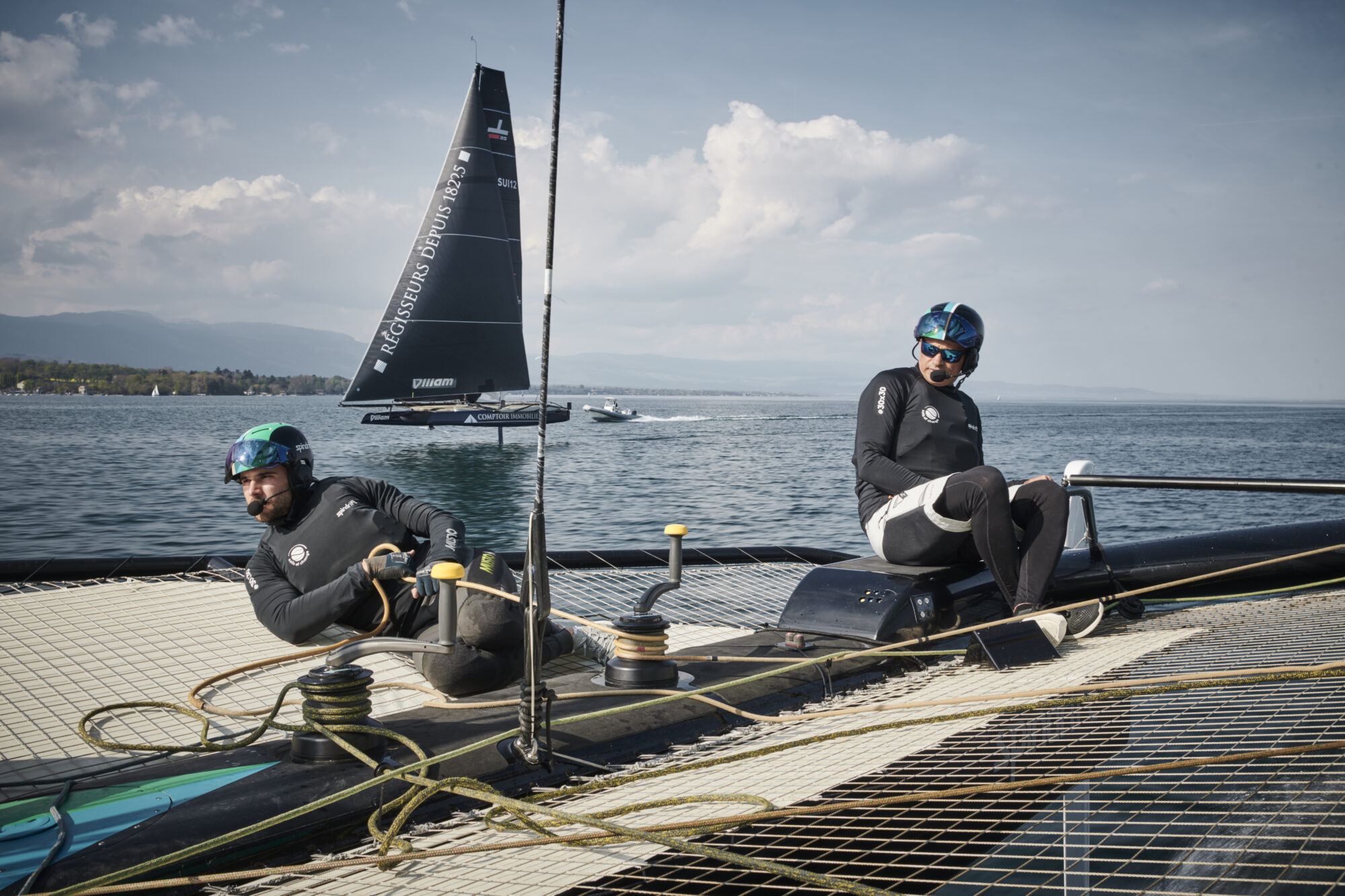 After getting a feel for the boat again and completing the first training sessions on Switzerland’s most famous lake, the Spindrift team is launching into a fresh season in TF35 with the Realstone Cup For Léman Hope in Nyon, the first race on the circuit, from 19 to 22 May. The objective? To perform well from the get-go to kick off proceedings in style. Yann Guichard, skipper of the boat, explains the challenges.

The preparation, brimming with confidence

“Since resuming training on Lake Geneva in mid-April, we’ve enjoyed some fantastic conditions, which have enabled us to get back on track and rediscover our automatic reflexes after several months without sailing. We’re all really relishing being aboard this incredible boat, which is capable of flight in upward of 7 to 8 knots of breeze, both upwind and downwind. The feeling you get is just magical! We’ve been sailing here for two years, but it’s still as pleasurable as ever the moment we step aboard and hook up with one another again.”

The crew, young and determined

“One of our team’s main assets is its youthfulness. Furthermore, we’re banking on stability (just one crew change compared with last season). It feels very pertinent and pleasing to share experiences and gather together people from different spheres to battle it out for a common cause. We have a lot of fun together, particularly so with all of us working to raise our game. In training, there’s always room for improvement, but we’ve enhanced the boat’s performance and each of us brings something extra to the team. We have better control and a wider understanding of the boat as a whole.”

The competition and its ‘unknown element’

“There’s bound to be an element of the unknown: we haven’t competed against any other crews since the end of last year. Equally, there have been numerous changes to the teams, which makes it more tricky to establish any kind of hierarchy in advance.

We suspect that Realteam Sailing and Alinghi Red Bull Racing, the two teams to beat in 2021, will take centre stage once again. We’ll do all we can to secure a podium place and we’re relying on the work carried out during training to give our all. However, victory really is anyone’s game among the seven crews. We’re inevitably eager to find out where we rank in relation to our rivals so we can decide what we still need to work on.”

The upcoming season with a view to the Bol d’Or

“It’s going to be a short and compact season with four races between late May and mid-June, which means we’ll have to really be on it from the first few days and the race openers. If we want to stand a chance of gunning for the top spots, we can’t afford to underperform. As such, the aim is to give it everything we’ve got. However, we know that there are a number of elements that cannot be predicted so a lot of it will be down to luck, and we’ll need all the planets to align if we are to stand out. That’s all part of the appeal of these races though. On top of that, we have one specific goal in mind: the Bol d’Or Mirabaud, on 11 June. That’s definitely what excites me the most.”

The Realstone Cup for Léman Hope, race one

“We’re all very happy to be back together again in Nyon to kick off the season. The atmosphere is bound to be warmer, with less strict health guidelines than last year, which means more sharing and exchanges. Out on the water, we’ll be able to rekindle our ties with Lake Geneva. There’s surely no finer setting for enabling the TF35s to really express themselves. It’s a slightly different format as there will be 4 days of racing rather than the 3 days last year, which means we’ll have the opportunity to compete in more races, especially if conditions are favourable.”